Cooking Oils and Butters You Should Never Eat

And Which Oils and Butters You Should Actually Be Consuming

Before you begin reading this, try your hardest to clear your mind of any preconceived notions about oils and butters.A lot of studies have been done over the past couple of years that have shed light on some of the oils and butters that were generally considered healthy and some that we considered bad.

For example, saturated fat was thought to be “the enemy” of food. We were told by a scientist named Ancel Keys not to consume it because it could cause heart disease and promote weight gain. These studies were since disproven and have no correlation to heart disease or weight gain. (Click here to learn more about how Ancel Keys mislead an entire nation into thinking fat was bad for us.)

In the 1960s, fats and oils made up about half of the calories in the average American diet and only about 13% of adults were obese and under 1% had type 2 diabetes. Today, the American diet takes in less fat, getting about 33 percent of calories from fats and oils and yet, a whopping 36% percent of adults are obese and about 11% percent have diabetes, most with type 2 diabetes.

Now, we’re not saying you should go ahead and start consuming fat at an unprecedented rate, but don’t be afraid to throw a little butter into your pan when sauteing your steak!

Good Oils & Butters Olive Oil/Extra Virgin Olive Oil
Olive oil is made by crushing olives and grinding them into paste, so it has a distinct taste that’s usually fruity and sometimes bitter. Olive oil is used primarily to sauté, pan-fry, sear, or stir-fry meats and vegetables, but it can also be used in salad dressings. It’s best to use olive oil for low to medium heat cooking.
Did you know that there are gourmet olive oil shops that specialize in infused olive oil to add a different flavor to the oil? They can be very tasty!
Health Benefits:

Coconut Oil
Coconut oil is made by pressing the fat from the white “meat” inside the giant nut. Usually it has a sweet taste and aroma, so it’s pleasant when used in baked goods. Coconut oil initially had a bad reputation because it’s extremely high in saturated fat, however this saturated fat is different than the fat that’s in unhealthy foods. It contains a unique form of dietary fat called Medium Chain Triglycerides (MCTs) which metabolize differently. In one study, participants found that 15-30 grams of MCTs per day increased 24 hour energy expenditure by 5%, totalling about 120 calories per day.

Did you know, not all coconut oils have that sweet coconut oil taste? Expeller-pressed coconut oil uses a different method of extraction that actually leaves behind the sweet taste, yet still contains a lot of the nutrients. Perfect for grilling meats!

Avocado Oil
Have you noticed that you can now buy mayo and ranch salad dressing that uses avocado oil? It may sound strange, but avocado oil has a very mild flavor, so you wouldn’t even notice it in these condiments. It also has a high smoke point, so it’s a perfect oil to use when cooking, sauteing, and baking.

Tallow
Tallow is usually made from cattle fat, but it can be from any animal except pork. It looks like a mixture of coconut oil and butter, with a waxy texture. It has a high smoke point, so it works great for frying or cooking meats and vegetables. It’s also found in many commercial soaps, moisturizers, and candles.

Just like coconut oil, tallow also had a bad reputation because it’s high in saturated fat and was thought to cause heart disease. Many studies have disproved this claim and instead tallow is now considered to be a healthier fat.

Lard
I know when you read this you probably thought, “Lard is healthy? Doesn’t it clog arteries?” We’re here to set the record straight – lard is a healthy cooking fat and deserves to make a comeback! If you think about it, our ancestors used to eat lard all of the time, and they had much lower rates of cardiovascular health problems.

Lard, made from pig fat, is an excellent choice for cooking and baking. It creates a tasty brown crust on vegetables and meats without a distinct flavor. It’s also what gives pies their delicious flakey crust!

Did you know, you would have to eat 50 mushrooms to get the same amount of Vitamin D as one tablespoon of lard? 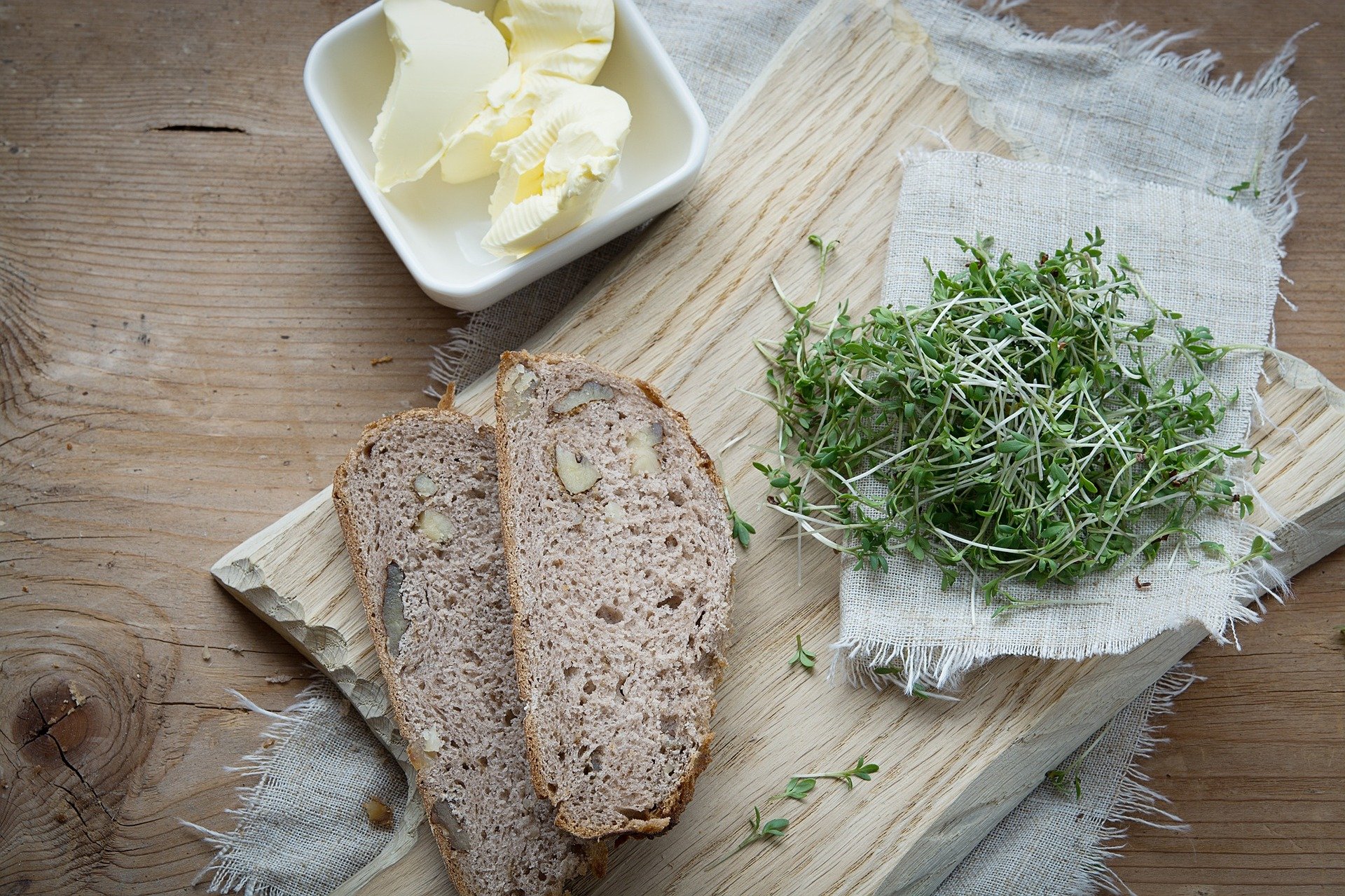 Butter
Again, you’re probably surprised to see this on the list of healthy fats because we’ve been told that it was bad for us. However, new research shows that this is one of the healthier options to cook with.

Butter is a dairy product made by churning fresh or fermented cream or milk. Butter has a salty and sweet taste, which makes it taste great in all types of dishes. It can be used to cook, bake, saute, or just lathered on foods like a baked potato or bagel.

Did you know, it takes 21 pints of milk to make a pound of butter? 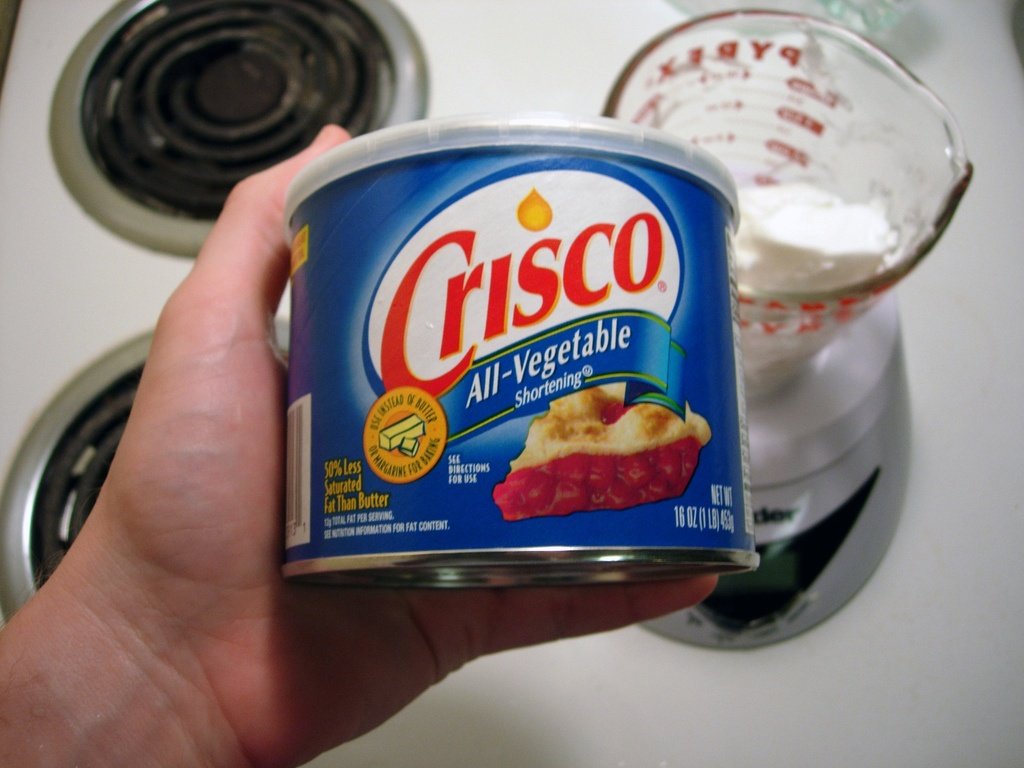 Crisco was invented in the early 1900’s by candle maker William Procter and his soap making friend, James Gamble. Since the meat industry was controlling the prices of lard and tallow (which were used to make soap and candles), Proctor and Gamble acquired cottonseed mills and developed the process of hydrogenation (processing inexpensive vegetable oils with hydrogen gas). This turned cottonseed oil into a thick, solid fat, similar to lard. It was extremely cheap to produce, and when the process of hydrogenation was added, it made the oil last a really long time. When it’s cooled, it looked exactly like lard.

Procter & Gamble marketed Crisco as a cheaper and healthier fat than the “unhealthy” lard, and was purchased by many food companies because it was so cheap. You’re probably eating cottonseed oil every day because it’s in almost every packaged and processed food in your store. Everything from chips, cereal, cookies, breads, salad dressings, mayo, pasta, to non-food items like soaps, shampoos, conditioners, makeup, lipstick, and so much more. 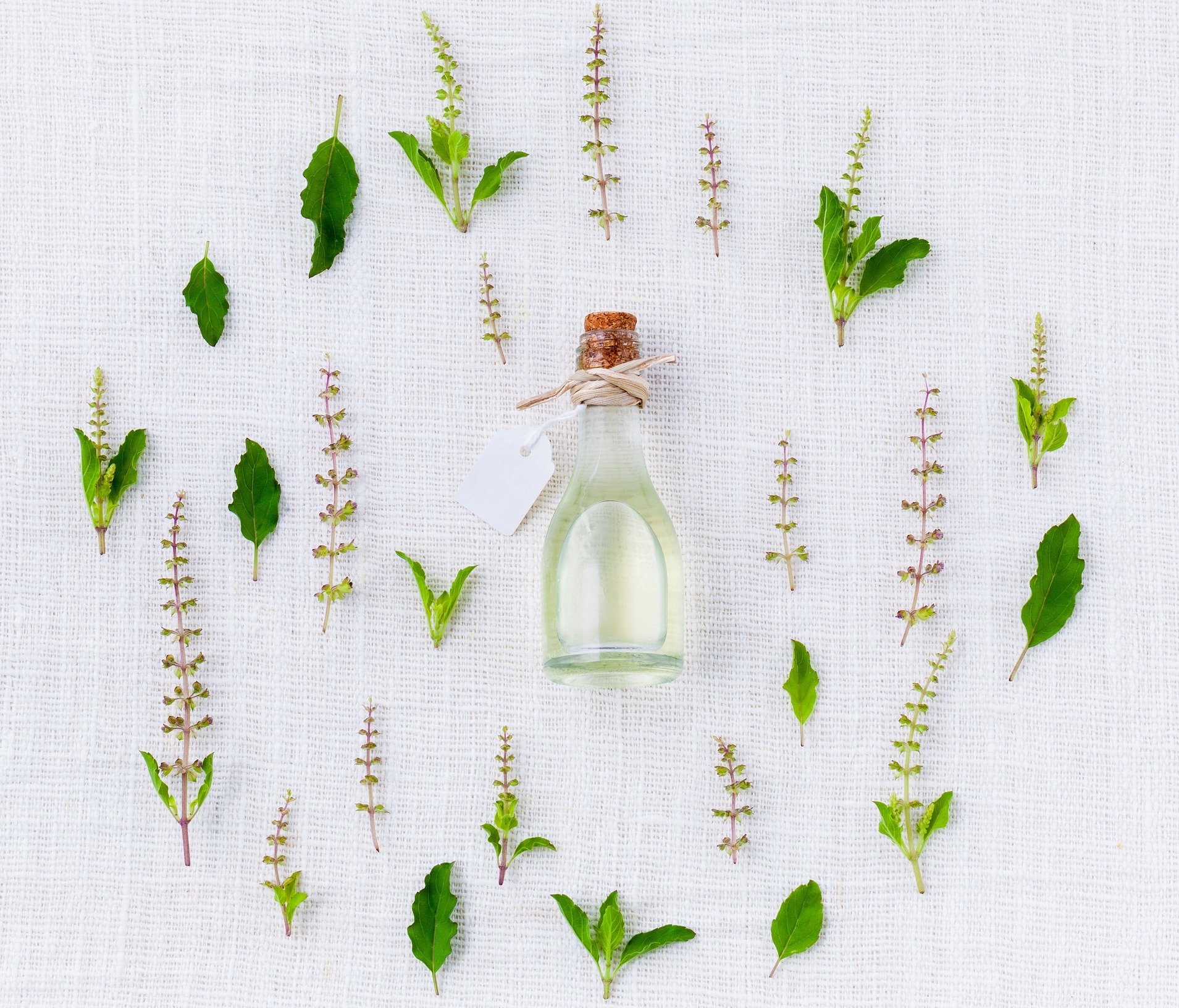 Vegetable Oil (Including Canola, Soybean, Corn, Sunflower, Safflower, and Peanut)Did you know, there’s not even one vegetable in vegetable oil? Yes, you read that right.
Although “vegetable” oil may sound healthier than lard and butter, don’t be fooled, it’s very unhealthy. These oils are actually made from plant based seeds including rapeseed (canola oil), soybean, corn, sunflower, safflower, and peanuts, which is where the name vegetable oil comes into play. While coconut oil and olive oil are extracted by pressing, these oils have been extracted in very unnatural ways, which is why it’s best to avoid them.

While traditional fats (butter, tallow, lard, olive oil, etc.) have been around for a long time, vegetable oils are a very new addition to the “food” world, only coming into existence around the 1900’s, These vegetables oils were created as a cheap substitution for fats and used in most of our processed foods. Alone, the oils tend to taste terrible, so there’s a lot that needs to be done to make a product that actually tastes good.
Health Risks 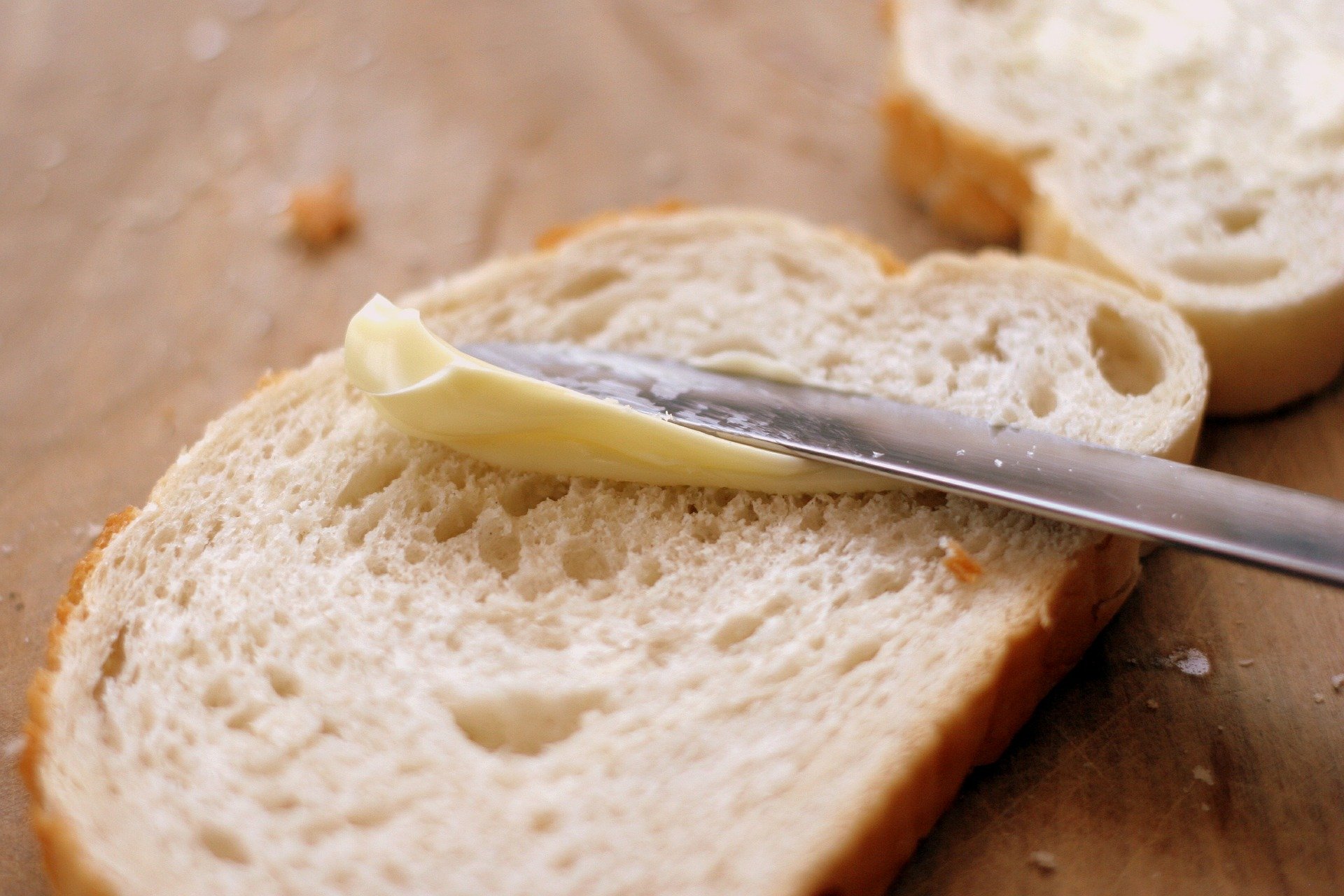 Margarine & Other Fake Butter Substitutes
Did you know, margarine is made from refined vegetable oils?

In the most simple answer, vegetable oil goes through a process called hydrogenation (just like Crisco) to change the molecular structure so that it’s a solid butter. It’s also colored so that it looks more like butter. It’s then fortified with synthetic vitamins and minerals so that it can claim to be healthier, because it had no real health benefits on it own.

If you’re looking to eat healthy, revert to the butters, oils, and foods that were only available prior to the 1900’s. For the most part, this food was untouched by scientists and are turning out to be the healthiest foods out there. When our society started making processed foods and incorporating it into our everyday lifestyles, we saw a huge uptick in health problems. Most of the food that has been “developed” in the past 100 years did not have enough science to back up their health claims and the overly processed foods are turning out to be very harmful.

For those looking to live a healthier lifestyle free from additives, unnatural hormones and chemicals, a home food delivery service might be a great fit. All food is preserved naturally using extremely cold temperatures and airtight packaging, so you know that you’re getting a clean piece of meat. You can learn more about Home Food Delivery Services here. 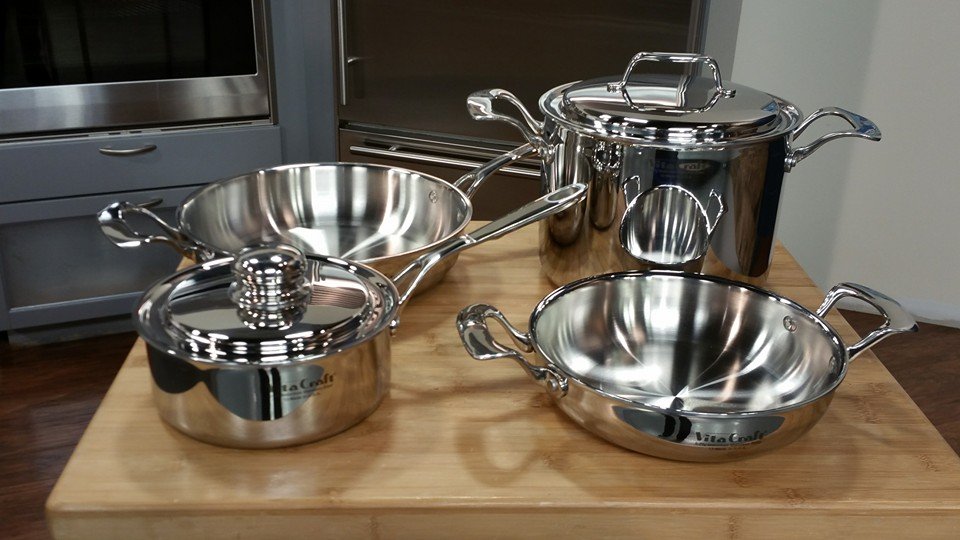 Photo Credit: Vita Craft
For those interested in cooking without using any added oils or butters, a waterless/greaseless cookware might be a great purchase (pictured above). Five Star Home Foods customers can purchase the Vita Craft Ultra Healthy Cooking System as part of our rewards program, granting you an extra discount which will pay off this appliance just by continuing to order from Five Star! Ask your culinary consultant about this appliance during your next meeting.